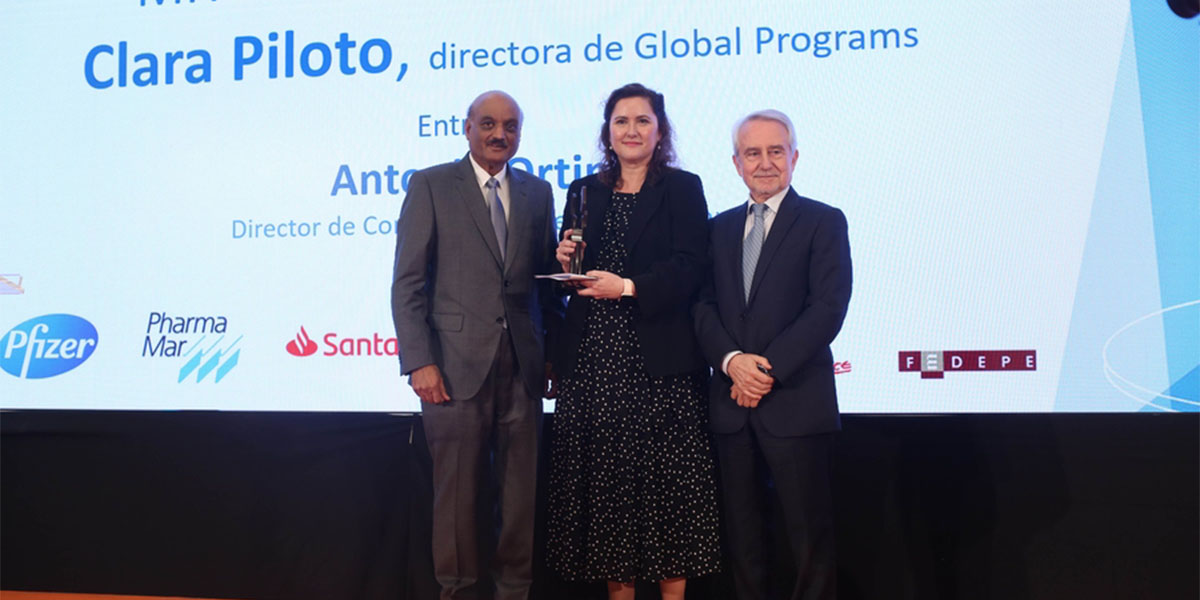 “This is a remarkable accomplishment, and a testament to the commitment MIT Professional Education and MIT have to supporting inclusion and diversity,” says Bhaskar Pant, executive director at MIT Professional Education. “Clara and her digital blended programs team worked in partnership with a Spanish platform partner and developed innovative programs in Spanish that have effectively reduced the gender gap by eliminating many of the traditional barriers to professional education programs, such as cost, geography, and language. As a result, more learners — in particular, women in Latin America — have been empowered with MIT knowledge and training to help succeed in the 21st century.”

According to the U.S. National Science Foundation, women today make up less than 25 percent of the STEM workforce in the United States. But the gap is even wider for women in Latin America. Statistics show only 2 percent of Latinas held science and engineering positions in 2015.

“Gender and other disparities in STEM are depriving the global workforce of talented minds that could be creating the next breakthrough technology,” says Piloto. “Expanding our professional education offerings to include courses taught in Spanish with global reach will clear a path to professional growth and training opportunities for those not served by us previously.”

MIT Professional Education expanded its offerings to include blended courses taught fully in Spanish in the fall of 2018. The Digital Plus Programs team collaborated with international education technology company, Global Alumni, to integrate MIT content with cutting-edge education technologies, and collaborative teaching methods aimed at promoting maximum interaction and engagement.

When the program first rolled out last October, Piloto says she noticed only 15 percent of enrollees in the “Leadership in Innovation” course were female. In keeping with a key strategic objective of MIT Professional Education, she and her team decided to launch an initiative to promote greater gender diversity and improve access for women across Latin America and Spain.

Over the past 12 months, female participation in Digital Plus Program courses has increased steadily and significantly. Women now make up a total of 32 percent of all participants in the various programs being delivered. As for that “Leadership in Innovation” course — this year, almost 40 percent of enrollees are women, up from a mere 15 percent.

“For many people around the world, MIT seems unattainable,” says Piloto. “Our professional online and blended programs make MIT content accessible and practical for all. It’s rewarding to know our work will have a lasting, positive impact on society.”

Piloto, a Cuban-born American, in conjunction with MIT Professional Education, received the “Hipatia Award” for these accomplishments at a ceremony held in Madrid on Oct. 29. Piloto was presented with a steel figure representing the abstract figure of women standing, an original creation by the Spanish sculptor Gonzalo De Salas.

MIT Professional Education will continue to develop new Spanish course offerings and has plans to launch a new Professional Certificate of Digital Transformation in early 2020. Eventually, Digital Plus Programs expects to expand even further to include courses in other languages, such as Portuguese and Chinese.

“We are very proud of the work of Clara and her team at MIT Professional Education,” says Pant. “It is their commitment that has created this opportunity for Spanish-speaking women professionals. We hope this success will inspire even more inclusion and diversity, and bring MIT knowledge to more people toward helping solve the world’s great challenges.”